What is the Vaccine Protocol We Require? 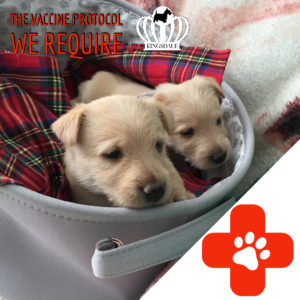 We try to keep abreast with all the health research being done on dogs and more specifically, with Scottish Terriers. In the past decade, experts and researchers have raised questions and come up with some answers regarding vaccines "routinely" given to dogs. This has resulted in some changes we believe will be responsible for promoting the improved health of our dogs' immune systems.

One good example of a change in vaccines is presented in the rabies vaccine. Formerly, the rabies vaccine had ingredients that included mercury in the vaccinations. Now there are rabies vaccines, without that ingredient, which is called thimerosal! Unfortunately, many vets are still giving Rabies vaccines that contain mercury. You'd think that with the information available about mercury's adverse impact on animal and human health, ALL vets would have stopped using the vaccine WITH mercury, but that is not the case. You may have to search to find a vet that only gives the thimerosal-free vaccine.

We require that our dogs only receive the rabies vaccine WITHOUT thimerosal. The rabies vaccines we insist upon are made by Boehringer Ingelheim (who bought Merial) and they are called IMRAB 1 TF or IMRAB 3 TF. The TF stands for (thimerosal-free formulation). The difference between the two vaccines is that one is labled for 1 year protection and the other is for 3 years.

This brings us to two other, less positive aspects of current rabies vaccines.

The first is, no one knows how long the immunity lasts from any rabies vaccine. The law (depending on which state you live in) requires puppies to be be vaccinated at between 4 and 6 months of age, and again a year later. After that, the vaccination is required every three years. However, the three years of immunity was developed as public health law, without science. There has been no research on how long the immunity lasts in canines as a species or in different breeds of canines. That research is now underway, to see how long immunity lasts. When the research is completed, veterinarians, dog owners and public health policy makers will be able to establish the correct timing for required vaccination. It might well be longer than 3 years. (Or not.)

The second is, the dosage of the rabies vaccine is exactly the same for a St. Bernard as for a Scottish Terrier. Scotties weigh around 20 pounds. St. Bernards weigh between 120 to 180 pounds. We don't know at this time if the dosage can be varied according to the size of the dog, and still confer adequate protection. But it seems that there might be a better way of determining adequate dosage based on size and metabolism of the dog.

Puppy Vaccines: Always 4 Weeks Apart, or more
Assuming puppies received colostrum from their mothers, and have been nursing on her for weeks, they will have some immunity to everything she is immune to, and that immunity lasts for weeks. In fact, the immunity they receive from their mothers is so strong, with respect to rabies, for example, that they cannot have that vaccine any younger than 13 weeks, because their mother's antibodies will prevent the vaccine from being fully effective.

We closely follow a vaccine protocol developed by Dr. Jean Dodds, DVM. You can download a pdf of the protocol here.

Also, we have our dogs' rabies vaccines administered to a hind leg, because our dogs are microchipped in the withers area of the back, and we don't want to trigger immune responses near any microchip site. It was found to cause cancer in cats.

Limiting Vaccinations To Only What is Necessary & Beneficial
As with the rabies vaccine, there are "routine" time periods that veterinarians re-vaccinate dogs. But, from dog to dog, and from breed to breed, there may be differences in existing immunity. More and more, health conscious dog owners are asking that "titers" be tested to see the level of immunity (antibodies)  their dog has to a specific disease. No vaccine, or "booster" is needed when the test results indicate sufficient protection.

Unfortunately, many general pet practice veterinarians don't realize this, but most serious, knowledgeable Scottish Terrier breeders do not have leptospirosis vaccines administered to their dogs. Scotties are known to have adverse reactions to these shots. They should only be given leptospirosis shots if they live in a wet or swampy or rural area where the threat of the disease is significant due to other farm animals or wildlife. If you live in such an area, ask Dana Johnston about what precautions must be taken before and after the vaccine.

Bordetella bronchiseptica vaccines, for "kennel cough" may  be administered as soon as four weeks after the first rabies shot. These are administered by intranasal squirt. Again, Dr. Jean Dodd warns that you as the dog owner MUST determine from your veterinarian whether the bordetella vaccine is combined with other vaccines, as it may be a) combining multiple vaccines your dog has already received and should not be receiving again at this time, and b) overwhelming your dog's immune system by combining so many vaccines and giving them all at one time. Dr.Dodds has written an excellent article about this vaccine and its relationship to adenovirus -2 and parainfluenza vaccines. Click here to download and read it.