Scotties have highest c-section rate for Purebred Dogs in Europe

Many people are concerned about dwindling numbers of Scottish Terriers being born and registered. Two problems the breed has, compared with other breeds, are smaller litter sizes and greater likelihood of need for birth by Caesarian section of Scotties.

An article published by Katy M. Evans and Vicki J. Adams, in the Journal of Small Animal Practice,(2010) investigated the frequency of c-sections in purebred dogs, and noted that a Swedish study had shown that Scottish Terriers were "the breed at highest risk of dystocia, with an incidence rate of 38.3 cases per 1000 dog years (Bergstrom and others2006)." The study's authors wrote: "Our data suggest that this may also be the case for UK Scottish terriers as they had the highest caesarean rate of all non-brachycephalic breeds, at 60%."

The authors also noted: "It has been reported that some Scottish terriers have a dorso-ventrally flattened pelvic canal that increases the risk of obstructive dystocia and the need for emergency caesarean section (Eneroth and others 1999)  However, the data for UK bitches suggest that uterine inertia may also be a problem in this breed (The Kennel Club 2006)."

You can read the entire report at this link. 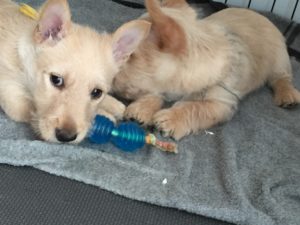